Home | Communities | Fire Fighter: Telgian is Helping Save a Celebrity in Firefighting History

Fire Fighter: Telgian is Helping Save a Celebrity in Firefighting History 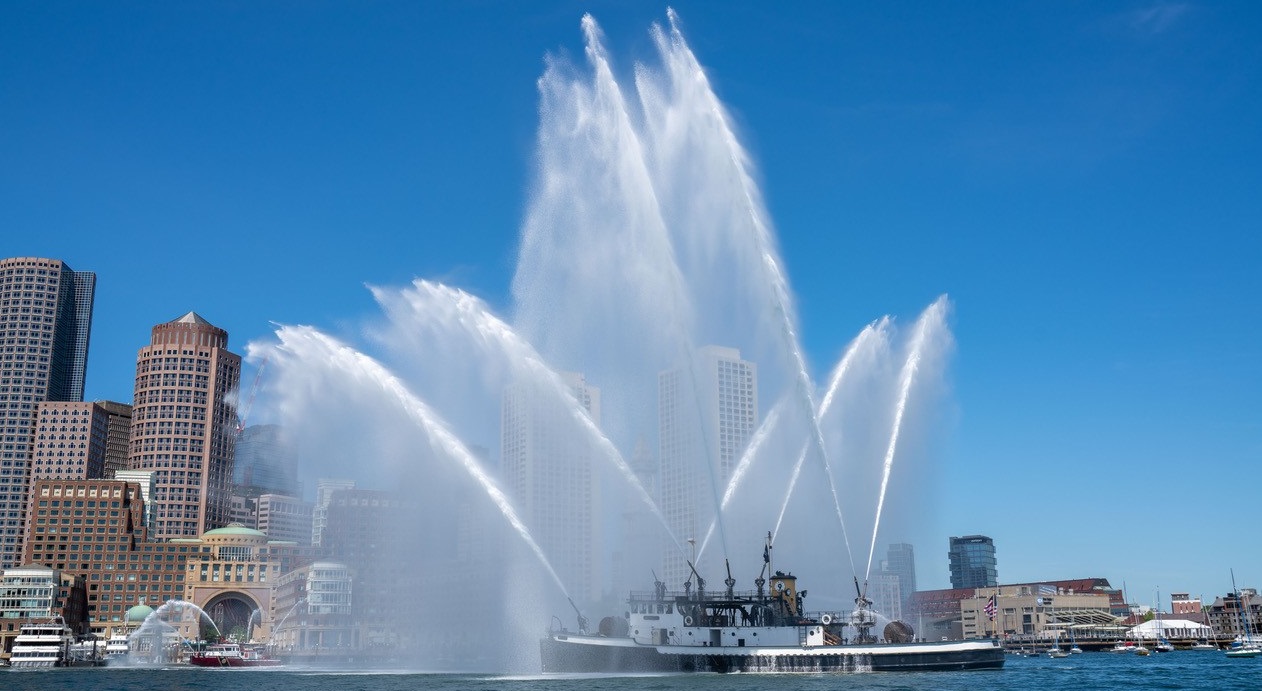 Fire Fighter, the world’s most award-decorated fireboat, sailed into Boston Harbor this June in celebration of NFPA’s 125th Anniversary. This trip was a new kind of “rescue mission” for the fireboat, and the 13-hour, 140 nautical mile trip to Boston was the furthest the 84-year-old vessel had ever traveled. Fire protection industry leader Telgian brought Fire Fighter to the city to help drive awareness for the fireboat, as well as to raise funds needed to preserve this historic vessel.

Fire Fighter attracted a large crowd of conference attendees, local firefighters and the public, all eager to witness the spectacular water cannon show. At one time pumping an impressive 20,000 – 25,000 gallons of water per minute, with 300 lbs. of pressure to nine topside fire monitors, the legendary Fire Fighter’s water display towered over, not only a local fireboat escort, but every craft docked in the harbor.

Now a floating museum, Fire Fighter is in serious need of repairs, with early estimates suggesting a price tag of at least $1,000,000 in shipyard work, in addition to standard yearly operating costs.

Designed by renowned naval architect William Francis Gibbs in 1938, Fire Fighter was considered a modern engineering marvel of her day, powered by one of the first diesel-electric powerplants ever fitted to a vessel of her size. The design was so advanced and performance so impressive, that throughout her entire 72-year active career, Fire Fighter remained in an essentially unchanged operational condition. Long considered “the Queen” of the FDNY Marine Unit Fleet, Fire Fighter was declared a U.S. National Historic Landmark in 1989. And, for approximately 65 years she was the largest and most powerful fireboat in the world.

“Most pieces of history are static displays, but after 84 years, Fire Fighter is still fully operational,” explained James Tomes, Fire Fighter Board Member and CEO of fire industry leader Telgian Holdings, Inc.  “If there was a fire, this fireboat could respond right now. Fire Fighter has outlasted all of her contemporaries – and even the majority of the FDNY fireboats half her age.”

Donate to Help Save Fire Fighter

The idea to bring the celebrated Fire Fighter from her current home at the Mystic Seaport Museum, Connecticut to the Boston Harbor came to Tomes after touring the boat in 2021 and learning about the heroic vessel’s need for restoration. Tomes’ avid interest in firefighting history evolved into a passion for preserving Fire Fighter. It also led to a seat on the Board of Directors for The Fire Boat Fire Fighter Museum and eventually to Telgian sponsoring the trip to Boston during the NFPA conference.

“It’s important for us to look back and honor our heritage. Fire Fighter is a true embodiment of the commitment and sacrifice of firefighters and fire protection professionals across the nation,” said Tomes. “The opportunity to show off the legendary power of Fire Fighter through a water display in the Boston Harbor helped grow visibility and raise awareness for the preservation of this truly unique piece of American maritime history.”

Known as “America’s Fireboat,” Fire Fighter protected the US for over seven decades during some of the most harrowing incidents in the country’s history. In her early career during World War II, Fire Fighter stood ready as ammunition filled boats loaded up and left for Europe from New York Harbor, providing courageous service on famous rescues including the fire and capsizing of the SS Normandie and the massive munitions ship El Estero fire.

In 1973, the tragic collision of the SS Esso Brussels and the SS Sea Witch proved to be the largest fire that Fire Fighter would ever fight singlehandedly. For their courageous and valiant service, her crew received the American Merchant Marine Seamanship Trophy and Fire Fighter earned the Gallant Ship Award, the only fireboat to have received this distinction to date.

On September 11th, 2001 the fireboat was tasked with perhaps the greatest challenge of her long and storied career – pumping water into lower Manhattan for three solid weeks after the Twin Towers collapsed and fire hydrants were crushed.  Fire Fighter and the other FDNY Marine Units became the sole source of water for firefighting efforts at Ground Zero. During the emergency, Fire Fighter engineers were able to coax 20,000 gallons of water per minute from the vintage water cannons throughout what became her longest ever emergency response call.

The extended service took its toll on the aging vessel, and Fire Fighter underwent a shipyard period to rebuild worn-out engines. Towards the end of her active career, the fireboat continued to work as an integral part of the FDNY Marine Unit, responding to marine emergencies from the Port Mobil, Staten Island gasoline barge explosion in 2003, to the rescue efforts of passengers aboard US Airways Flight 1549 after its infamous emergency landing in the Hudson River in 2009.

In 2010, she was decommissioned to enjoy retirement and was replaced by Fire Fighter II.  And in 2012, The Fireboat Fire Fighter Museum, a 501c3 non-profit organization, was born. The Museum was designed to preserve and honor the fireboat as a fully operational vessel, memorial, and teaching museum.

“Today, the museum ship is a 100% volunteer organization and relies on the time, generosity, and support of firefighting professionals, as well as the general public to help reach the goal of maintaining a truly unique piece of American maritime and firefighting history,” explained Charles Ritchie, president and founder of The Fireboat Fire Fighter Museum.

What’s next for Fire Fighter?

Introducing Fire Fighter to the city of Boston and thousands of fire protection industry professionals at NFPA resulted in numerous corporate donations and the sale of over 1,000 tour tickets to the general public. However, more funds are crucial so that Fire Fighter can be restored to her former glory.

“Fire Fighter’s history mirrors the perseverance of firefighters across the country and their tireless dedication to serving the community,” said Ritchie. “In order to keep Fire Fighter afloat, we are calling upon those in the fire protection industry to help save this shared history.”

Most urgently needed are restoration of all the firefighting discharge piping and 84-year-old pumps, high sea suctions and valves for engine cooling, which will return Fighter back to her fighting form, as well as extensive steel work to the superstructure and decks. But this important piece of American history is well worth the rescue.  Corporations and individuals interesting in underwriting costs of needed repairs can learn more by visiting America’s Fireboat.

Donate to Help Save Fire Fighter 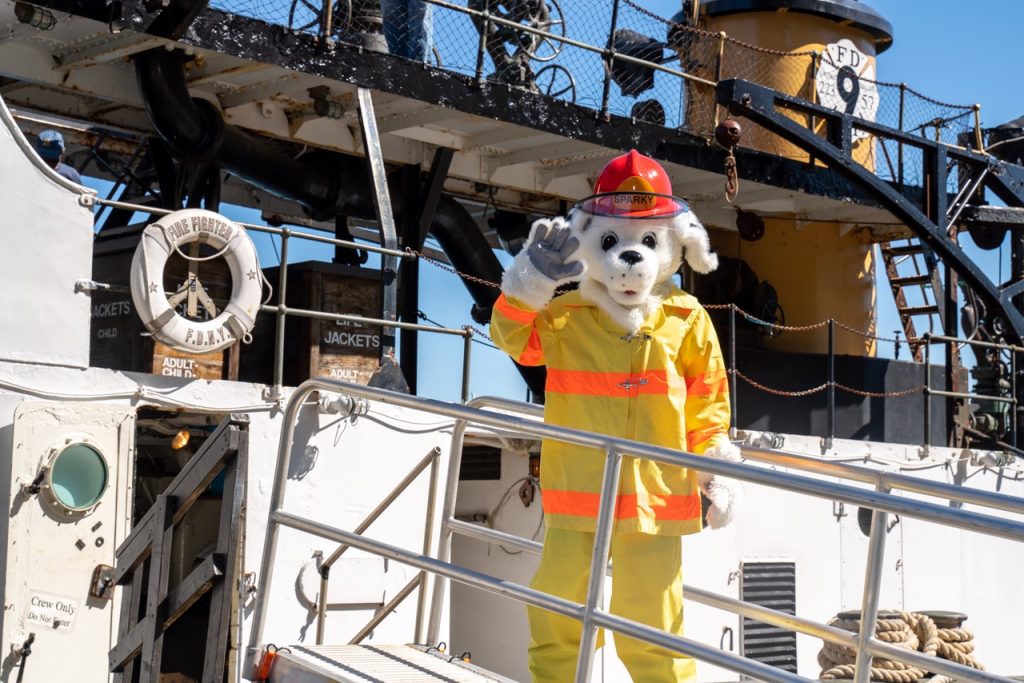 Telgian Celebrates 5 Years of Support for the Thunderbird Fi...

Telgian is a proud supporter of numerous community organizations, programs, and initiatives. […]

Telgian Holds a “Pink Out” in Support of Breast...