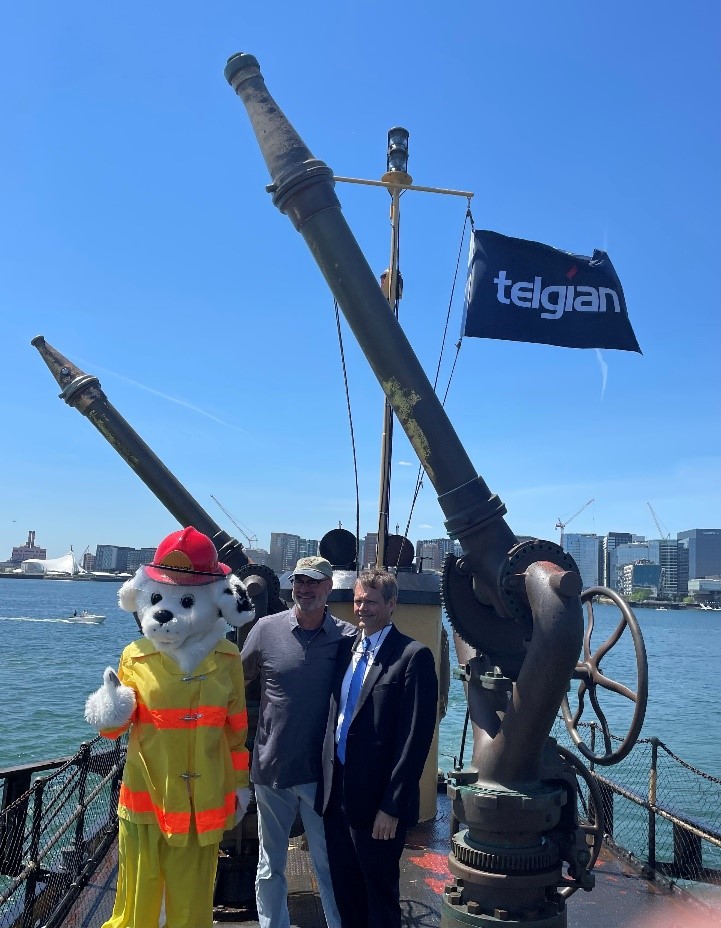 International Fire Fighter magazine recently sat down with James Tomes, a Fireboat Fire Fighter Museum Board Member and CEO of fire protection industry leader Telgian Holdings, Inc. to learn what’s next for the iconic vessel. The fireboat is the world’s most award-decorated fireboat; now in its 84th year and a floating teaching museum, the fireboat is in serious need of repairs. In addition to standard yearly operating costs, early estimates suggest a price tag of at least $1,000,000 in shipyard work.

Most Americans will recognize the events of Fire Fighter’s long and impressive rescue resume in the New York City Harbor. For example, in 1973 the tragic collision of the SS Esso Brussels and the SS Sea Witch was the largest fire that she would ever fight singlehandedly.

On September 11th, 2001 Fire Fighter was tasked with the greatest challenge of her long career. After hydrants were crushed around the Twin Towers collapse in lower Manhattan, she pumped water for three solid weeks and along with other FDNY Marine Units, the fireboats became the only source of water for firefighting efforts at Ground Zero.

In 2009, Fire Fighter continued to work as an integral part of the FDNY Marine Unit, responding to marine emergencies such as the rescue efforts of passengers aboard US Airways Flight 1549 after its infamous emergency landing in the Hudson River in 2009.

Why save Fire Fighter?

Designed in 1938 by William Francis Gibbs, a renowned naval architect, Fire Fighter was considered a modern engineering marvel of her day. In fact, the design was so advanced and her performance was so impressive, that today she remains in an essentially unchanged operational condition.

Long considered “the Queen” of the FDNY Marine Unit Fleet, Fire Fighter was declared a U.S. National Historic Landmark in 1989, a full 21 years before her decommissioning in 2010. And, for approximately 65 years, she was acknowledged as the largest and most powerful fireboat in the world.

“It’s important for us to look back and honor our heritage. Fire Fighter is a true embodiment of the commitment and sacrifice of firefighters and fire protection professionals across the nation,” said Tomes in the recent interview.

Where is Fire Fighter today?

Currently docked at the Mystic Seaport Museum in Mystic, Connecticut, the fireboat is now floating museum, open to the public. The Fireboat Fire Fighter Museum is a 501c3 non-profit organization dedicated to preserving the heroic fireboat as a fully operational vessel, memorial, and teaching museum.

A 100% volunteer organization, the Fireboat Fire Fighter Museum relies on the time, generosity, and support of firefighting professionals, as well as the general public, to help reach the goal of maintaining this truly unique piece of American maritime and firefighting history.

Here’s how to get involved:

In order to keep Fire Fighter afloat, the crew and volunteers need help. Most urgently needed are restoration and work on:

Corporations and individuals interesting in underwriting costs of needed repairs can learn more by visiting https://americasfireboat.org/