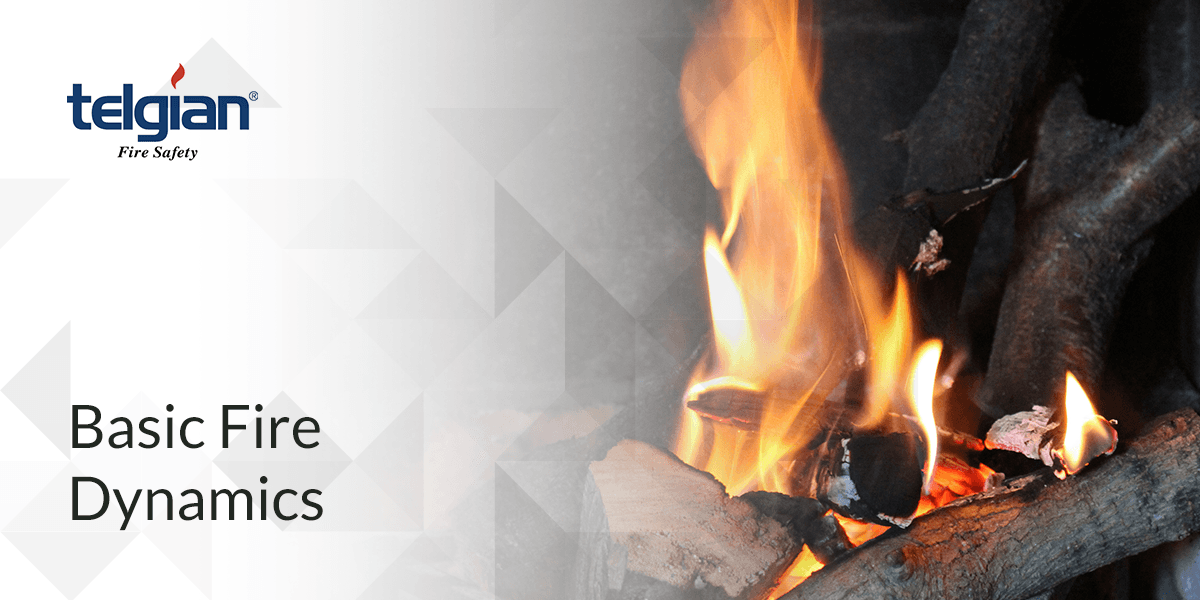 Movies often use structure fires to tell compelling stories of a character’s bravery, but the truth is that fire behaves far differently in real life than it does on the big screen. Fire is a dangerous force, leading to the destruction of property and death every year. A proper understanding of the nature of fire is necessary for learning how to best control it during moments of crisis.

Your business should understand some basic fire dynamics so you can be better prepared in the event of a fire. Knowing how fire behaves is one of the first steps in keeping employees safe as well as the first responders who put their lives on the line to protect your building and the people within. 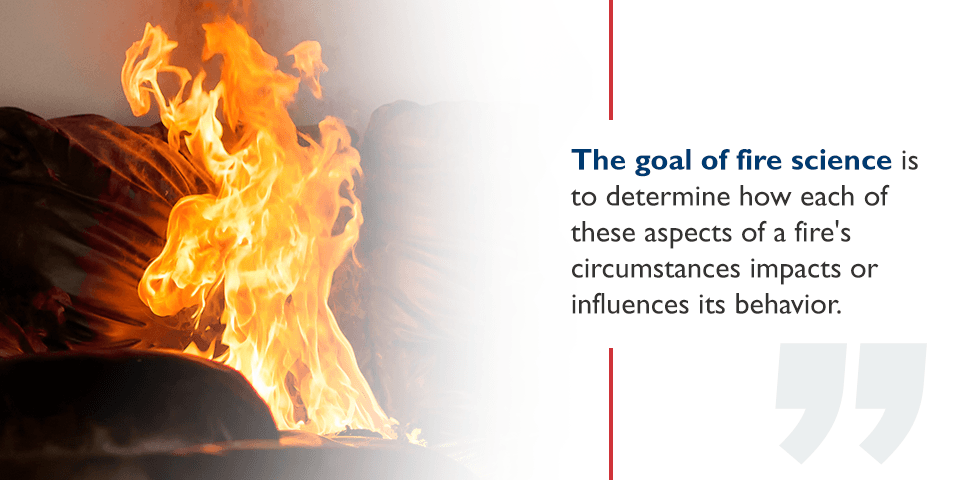 What Is Fire Dynamics?

Fire dynamics brings together several disciplines to better understand the nature of fire. These include chemistry, material science, fire science, mechanical engineering, fluid mechanics and heat transfer. The goal of fire science is to determine how each of these aspects of a fire’s circumstances impacts or influences its behavior. Fire dynamics is the study of how fires begin, grow and evolve over time.

Learning more about fire dynamics is useful for the following reasons:

Before you can take a closer look at fire dynamics, you should understand the fundamentals of fire. 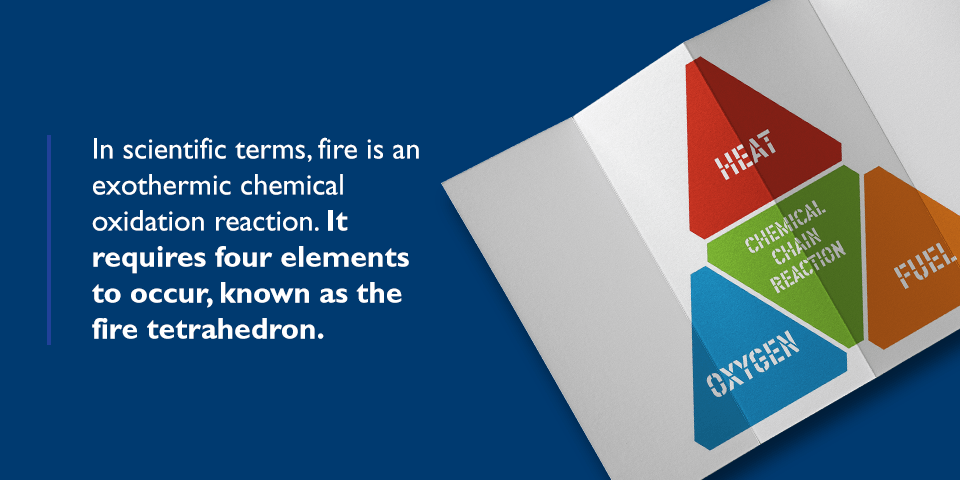 Everyone knows fire as the hot, bright force that hurts to touch and can be dangerous for people, animals and the environment. But it’s also something we rely on for warmth and safety. In scientific terms, fire is an exothermic chemical oxidation reaction. It requires four elements to occur, known as the fire tetrahedron. Remove a single element, and the fire will go out or be unable to start in the first place. Here are the four elements: 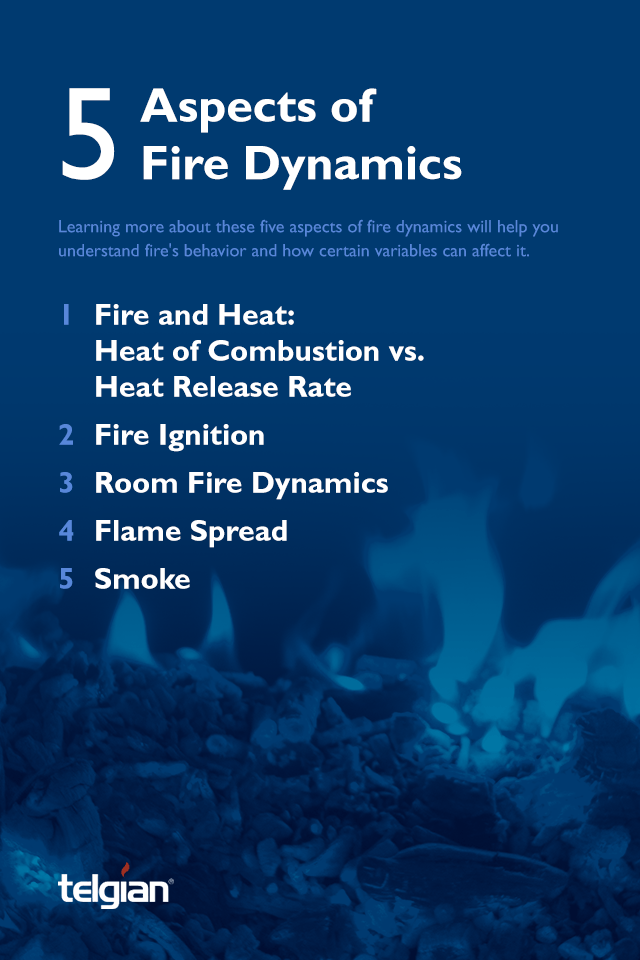 Fire dynamics is a broad and extensive field of research that has years of experiments and scientific studies behind it. For this introduction to fire dynamics, we’ll focus on five of the most fundamental aspects — heat release rate, fire ignition, room fire dynamics, flame spread and smoke. Learning more about these five aspects of fire dynamics will help you understand fire’s behavior and how certain variables can affect it. This is true in any location, including your place of business.

1. Fire and Heat: Heat of Combustion vs. Heat Release Rate

The following two concepts contribute to a fire’s combustion:

You should also understand the difference between “heat of combustion” and “heat release rate.” The material a fire uses as fuel has an effect on the heat it gives off. Wood and paper have the lowest heat of combustion, which means it takes less heat for wood to catch on fire. Fuels such as plastic or gasoline have a much higher heat of combustion, meaning it takes more heat for a fire to begin consuming them.

Starting a campfire is a good example of heat release rate in action. Trying to start a campfire with a single log is tough work. Instead, your best bet is to chop up the log into smaller pieces, or kindling. Lighting pieces of kindling on fire is much easier than trying to light a whole log on fire. Each tiny piece of kindling has a high heat release rate, which raises the surrounding kindling’s temperature, making the whole bunch easier to light.

You can take the example a step further. Imagine if you ground a log into sawdust and scattered it throughout the air. Each tiny piece of sawdust would have such a high heat release rate that a single ignition could result in an explosion as each speck combusted at once. It’s clear to see that the configuration of the fuel influences a fire’s heat release rate. More available surface area leads to a higher heat release rate, causing fires to burn faster and hotter.

Ignition refers to the moment a material catches on fire. It occurs when a material’s surface gives off enough combustible vapors at an ignitable range. For some materials, like flammable liquids or gases, these vapors can exist at standard ambient temperatures. That’s why smoking cigarettes is illegal while filling up your gas tank. The burning ash can ignite the gasoline’s vapors which could then spread to the liquid gasoline itself. These materials are dangerous due to the ease at which they ignite, making proper fire safety crucial.

Solid flammable materials need the application of a heat source to their surface to start giving off ignitable vapors. The necessary amount of energy for this release to occur differs among materials. “Pyrolysis” is the process in which solid materials transform into a gas, and it is a key part of the ignition process for these solid materials.

A process called “charring” can affect the ignition of solid fuels as it influences the transfer of heat. Fire chars its fuel as it consumes it, creating a carbon-based, solid deposit where uncharted fuel used to be. As the fire rages on, char becomes ash — the familiar deposit leftover in a campfire after the fire has used up all the fuel. Solids that resist charring leave nothing behind after the fire consumes and decomposes them.

A fire’s surroundings will affect its intensity and growth rate. This is especially true with indoor fires. Room fire dynamics takes a closer look at how fires behave in rooms based on various factors.

The smoke and fire from the ceiling jet then accumulate and descend to the floor, engulfing the whole room in flames. Through a process known as a “flashover,” the heat from the ceiling radiates to the rest of the room, leading to the combustion of all flammable materials nearby. This can lead to fire spreading at a rapid rate. The smoke and fire then begin spreading through any openings, cracks or doorways in the room, looking for more fuel and oxygen to consume.

The smoke and toxic gases that spread throughout a building pose a threat to anyone inside. Breathing these harsh substances can cause damage to the lungs, causing serious injury or even death. Studying fire dynamics shows that smoke travels away from the source of the fire, making an area dangerous even if the fire is raging in a separate room.

If a room is airtight, the fire could use all the oxygen in the room and begin to diminish after reaching its developed stage. In the most fortunate circumstances, this could happen before the fire engulfs the entire room. This poses a severe threat if oxygenated air is able to enter the space through a newly opened door or window. The reintroduction of oxygen could cause a “flashback,” which is a fireball formed from large amounts of fuel bursting into heavy flames in a single moment.

Flame spread is the movement of fire across the surface of a liquid or solid fuel source. This is possible due to the rising temperature of the fuel source, influenced by the flame. As the temperature of the fuel increases, the fire can travel farther across it. This forms a cyclical relationship. As the fire heats up the fuel, it can more easily consume it. And if there is more fire present, there will be more heat, allowing for a greater flame spread rate.

Most people associate smoke with fire. If you see billowing smoke in the distance, it’s safe to assume there may be a fire somewhere nearby. Smoke is one of the most dangerous aspects of a fire and can cause death before the fire even reaches a person’s location. Understanding the behavior of smoke is a crucial part of fire dynamics.

Smoke has different appearances depending on the current stage of the fire from which it originates. Light smoke often appears during the smoldering combustion stage of a fire. Dark, black smoke is characteristic of full combustion and the presence of flames. It’s important to note that the smoke layer above the flames has a high amount of heat transfer. This is due to the high heat release rate of soot present in the flames.

Smoke has the ability to absorb and scatter light, making it of great interest to the fire safety and protection industry. Learning more about how smoke affects light helps manufacturers make safer, better products. These include products with the following characteristics:

Contact Telgian to Learn About Our Fire and Life Safety Services

At Telgian, we offer fire testing and inspection services so you can be sure your business is ready for the moments in life you hope never happen. When it comes to fire safety, making sure you’re meeting local and state standards is the most important thing you can do. Compliance can ensure you avoid costly fees and penalties. It’s also an investment in the safety of your customers, employees, and anyone else in your business building.

Call us at 1-877-TELGIAN or contact us online today to learn more. We look forward to helping you take your next step toward fire safety for your business.