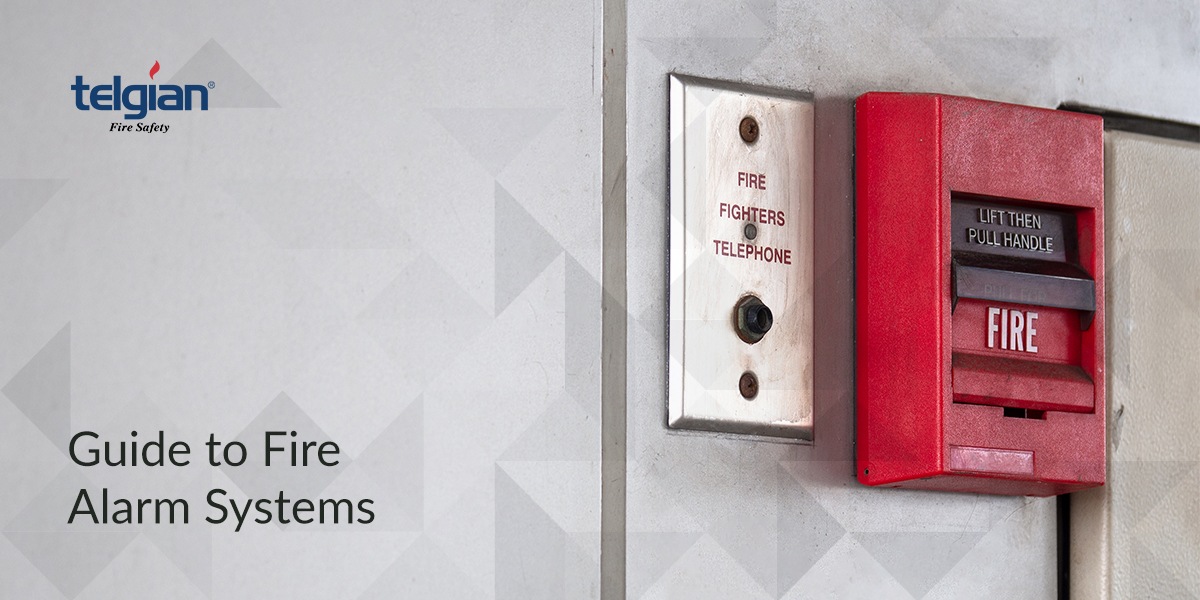 A fire alarm system consists of various electronic devices that work together to detect and notify people of a fire or other emergency. Over the years, fire alarm systems have become increasingly sophisticated, so we’ve put together a guide to help you understand all the components of a fire detection alarm system and get the most out of this essential technology.

How Do Fire Alarm Systems Work?

A fire alarm system’s chief purpose is to detect fires and quickly notify both the occupants of the building and emergency services from a centrally controlled and monitored location. These systems also monitor themselves, identifying the location and origin of the alarms and sensing problems with connections and wiring that might prevent the system from working properly. Essentially, fire detection systems have four primary functions.

These highly advanced systems use a network of appliances, devices and control panels to perform these four functions. To help you better understand the workings of an alarm system, we’ll discuss each component in detail below.

Components of an Alarm System

A fire alarm system consists of many components, including:

Below we’re going to explain what each component does.

The fire alarm control panel, commonly abbreviated as FACU, is the system’s “brain.” It receives messages from the initiating devices, also known as inputs, and performs the following functions.

A poorly designed or installed fire alarm system that doesn’t get routine maintenance, testing and inspection will likely go off even when there’s no genuine danger. Frequent false alarms will cause people to take them less seriously. When hearing a fire alarm, many people assume it’s no cause for concern unless they also smell smoke or see flames.

To minimize the incidence of false alarms, the fire alarm industry has pushed for proper system design, installation, testing, maintenance and inspection.

The types of fire alarm systems include addressable and non-addressable.

Most property owners and managers prefer addressable systems, as they let you know the specific location of the alarm and assess the situation much more quickly. Some fire alarm panels can also notify remote alarm monitoring stations, which can then contact emergency services. Most state laws do not allow the panels to directly contact fire departments.

The Three States of a Fire Alarm System

Fire alarm panels continuously monitor and indicate the state of the fire alarm system. For the majority of systems, there are three possible states.

A pull station is probably the fire alarm system component you’re most familiar with. It’s a manually operated device that initiates an alarm signal when someone pulls its handle. While smoke may take a few minutes to reach a smoke detector, you can activate a pull station within just a few seconds of a fire or other emergency, which allows for a quicker evacuation and faster reaction times by the fire department. Pull stations are available in various sizes and shapes and can come with protective covers upon request.

A smoke detector is a device that initiates an alarm signal when it senses smoke. There are two classifications of these devices, depending on the type of sensor they use to detect smoke particles.

Duct detectors are smoke detectors installed in air conditioning and heating ducts. They shut air handling units down, preventing smoke from traveling all over the building via the air ducts. 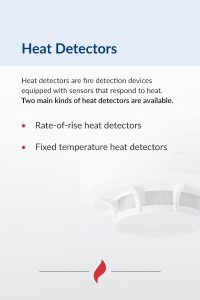 This kind of smoke detector projects a beam of light across the area it’s protecting. If smoke crosses the path of the beam, the detector will respond.

This type of detector uses tubes to deliver air or smoke to a central detector equipped with a sensor that can detect minute changes to the air’s chemical composition. These detectors are usually highly sensitive.

Water flow switches use paddles located inside water-filled piping that will respond if water flows. On sprinkler systems, their design allows them to work if water is flowing from only one sprinkler.

A tamper switch is a supervisory initiating device that operates if someone moves its valve from its regular position.

These devices send a visual or audible notification to alert a building’s occupants to evacuate.

These devices send notifications by flashing a light and blaring a siren to alert people to respond.

Some fire alarm systems have internal or external dialers used to contact monitoring centers or alarm receiving stations. Communicators can use radio signals, phone lines or an internet connection to maintain contact. Panels may have built-in dialers or communicators.

How Do Fire Alarm Systems Integrate With Other Life Safety Technology?

Sometimes, building codes require the integration between fire alarm systems and other technology. However, in other cases, integration is optional and voluntary, such as integration with lighting systems, HVAC systems, door locks and security systems. While these systems have historically needed independent network communications, they can now operate on a shared infrastructure, saving you money and streamlining processes.

Some examples of functions and systems commonly interfaced with fire alarm systems are:

According to the National Fire Alarm and Signaling Code, some of the above are “fire safety functions” meant to improve occupants’ life safety or control the spread of fire. You can choose to integrate other functions or systems for various reasons, such as for their operational benefits, information sharing and cost savings.

How Often Do You Need to Inspect Fire Alarms?

You can learn about the requirements for inspecting, testing and maintaining fire alarm systems, including their notification appliances and initiating devices, in Chapter 14 of NFPA 72 ‘National Fire Alarm and Signaling Code’. However, we will summarize these requirements below.

You should have the components of your fire alarm visually inspected every week, month, six months or once per year, according to NFPA 72’s schedule in table 14.3.1. However, these schedules can vary depending on your local laws, as well as the authority-having jurisdiction. Standard visual inspections include the following.

You must inspect all equipment yearly to confirm there aren’t any changes affecting its performance.

Testing components involves more steps than visual inspections, but it’s unnecessary to do it as often. Though several components require semiannual testing, most components only need once-a-year tests, according to NFPA 72’s table 14.4.3.2. Like with inspections, your testing schedule can vary depending on your local laws and authority-having jurisdiction. Here are some examples of component testings.

You must maintain the components of your fire alarm system according to the instructions published by your manufacturer. How frequently you perform maintenance depends on environmental conditions, as well as the kind of equipment you have. How you clean your system components depends on their location and the manufacturer guidelines.

For the past 35 years, Telgian Fire Safety has been providing innovative solutions for clients worldwide. Learn more about our services by browsing our site or contacting us.