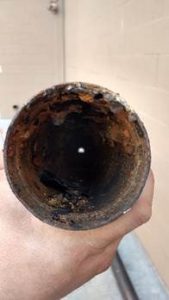 cals and combination of chemicals being introduced into the public water supplies that are supplying these systems has contributed to an increasing exposure to corrosion in FPS.  As corrosion can be found in many different forms throughout the diverse types of sprinkler systems that are commonly installed today, it can be difficult to defend against corrosion and can have a detrimental effect on the overall adequacy of a system’s original design performance objective.

There are two main types of corrosion that occur in FPS, generalized corrosion (rust) and microbiologically influenced corrosion (MIC).  Generalized corrosion requires the presence of water, iron, and oxygen to create an atmosphere of corrosion.  Microbiologically influenced corrosion is a type of corrosion that is promulgated by the presence of one of three types of bacteria; acid producing bacteria, sulfur reducing bacteria, or iron related bacteria; that are active within a piping system.  Corrosion occurs in all types of systems constructed of just about any type of currently listed material for FPS.  In wet systems the presence of air pockets will contribute to corrosion and conversely in dry and pre-action systems the presence of residual moisture will contribute to corrosion.  Corrosion can also be the function of bacteria or other organisms introduced to an FPS from the public water system creating an active growth or occlusion within the system.

For too many systems, the damage is already done, or is currently in progress.  For new systems, there are ways to try and mitigate this problem before it starts.  With most any new system that is going to be installed there will be an analysis performed on the available water supply for determining pipe sizing, pump sizing, and capacity.  Along with performing a water supply analysis for pressure and volume, adding a detailed laboratory testing report of a water sample from the requisite supply can help to identify potential corrosion and other harmful presence within the water supply and help to identify possible strategies for minimizing the detrimental effects of these potential corrosion markers.

On existing systems, there are options to pre-treat water as a system is energized with some form of proprietary chemicals that will help to create a shield or wall between the water and the pipe wall or to kill corrosion causing bacteria. Other options are available to continuously monitor a system through a viewing station or monitoring station with coupons or inserts that can be removed and inspected for possible corrosion.  If corrosion is detected, then additional steps can be taken to mitigate the threat.

Methods to inspect the inside of pipe using cameras or physically removing/replacing random portions of existing systems can help to understand what is potentially happening on the interior of a system and where on the system it is occurring.  You can also do an internal investigation through valves and sight glasses.  Any combination of these methods will help to detect corrosion at any stage, and can play a role in the five year internal inspections called for in NFPA 25 that regulates inspection testing and maintenance of FPS.

A non-intrusive method for analyzing pipe wall thickness through sound wave or ultrasonic localized guided wave technology can provide a picture of pipe wall thickness or possible internal obstruction through many data points on a system.  This method can be an advantageous way of assessing a system without taking it out of commission and can help to minimize the chance of business interruption due to water loss or other potential hazards of performing an internal investigation.

The costs of the effect of corrosion can be broken down into a few different categories, each having its own inherent cost or risk of reduced safety associated with it.  The primary function of an FPS is to provide a minimum level of life and property protection as prescribed by the prevailing codes and standards adopted in any given area for any given type of occupancy.  Any type of corrosion that grows or builds on the interior of a system is effectively changing the hydraulics that an FPS was designed and installed to, therefore jeopardizing that system’s ability to perform in accordance with original design criteria and established code at the time of installation.  Even a small amount of buildup on the interior pipe walls could significantly decrease the amount of water that a system can supply in the event of a fire.  Further, any amount of buildup has the potential to completely block the orifice of an individual sprinkler or sprinklers in the event of a system activation.

On the back-end of the corrosion problem is the monetary cost of repairing these systems and the associated downtime of these systems.  The initial approach is to fix only small sections at a time where the problem has made itself known, repeating this activity with each system integrity failure.  This Band-Aid approach is a purely reactionary response to a breakdown in the integrity of the FPS, requiring both money to repair the system and the hidden costs associated with downtime of the system and work productivity in the area of the system break.  The lost income and productivity due to system downtime and workplace interruptions is not readily tracked but will have an effect on the overall bottom line of the business operations.  In some cases, depending on how rapid the corrosion is and how often the system requires repair a wholesale FPS replacement can be considered.  It is significantly more expensive to replace a system in an environment that is currently in use.

There are ways to increase the reliability of a system through improved design and installation methods and the specifying and use of alternative materials within a system.  Incorporating as few trapped sections of pipe as is feasible based on the actual built environment that minimizes either the amount of trapped air in a wet system or the amount of trapped water in a dry or pre-action system can help extend the life of a system.  Also adding proper pitch to both mains and branchlines can help minimize the amount of residual moisture in dry and pre-action systems.  The only way to fully stop corrosion in a dry pipe system is to completely remove all of the moisture or completely remove all of the oxygen gas in the system.  The installation of an air vent at any high points in a system can help to further eliminate air pockets in a wet system.  The use of heavier walled pipe along with black steel pipe can also extend the longevity and expected life span of a system.  In dry and pre-action systems you can add a supervised control valve to a system riser to limit water and moisture entering systems during routine inspection, testing and maintenance, thereby reducing the opportunity for there to be latent residual moisture promulgating corrosion within the system.

A newer method of treating systems has been developed to purge systems of oxygen and introduce nitrogen.  This can be done for both wet and dry pipe systems.  In dry pipe systems the introduction of nitrogen either at the system fill or through a purging of oxygen can be accomplished to eliminate 98% or more of oxygen gas in a system.  A newer process called wet pipe nitrogen inerting (WPNI) has been developed and allows for a similar process to dry pipe systems to purge systems of oxygen gas present in a system.  Some early studies have shown that systems that utilize nitrogen in place of compressed air show significantly less corrosion in the short term.  Further studies are continuing into this area of research.

As the codes and standards continue to evolve as new technology emerges, the research into the available methods of detection and mitigation of corrosion will continue to be refined to meet these requirements.  All of the methods of detection and mitigation come with their own inherent sets of positive and negative factors that can help to determine the most appropriate strategy or group of strategies that can help to lengthen the life expectancy of a fire protection system for both existing systems and new systems.  It is incumbent upon all of the stakeholders to identify all of the necessary inputs to come up with a strategy that can be effective at maximizing the efficiency, adequacy and life expectancy of these systems while also containing a cost benefit element that makes these strategies worthwhile.

For questions on this topic you can email Jarron Gass at JGass@telgian.com

We not always know the standards - we help write them.

During the holiday season, store shelves are filled with merchandise ready for […]

Smoke Modeling and Management for Hotels

According to estimates by the U.S. Fire Administration in a 2018 report, […]